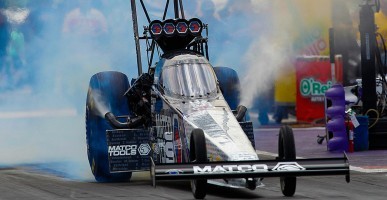 One hot summer I had a friend whose Dad had a drag racing car. It was the coolest thing for a 14 year old kid, this drag racing car. You know, in some ways, drag racing is an absolutely hilarious sport. I don’t know anything about it, but it doesn’t seem to me that there’s a whole lot of strategy involved. Put the pedal down and the first one to the end wins.

My friend’s Dad had this pit crew. And they all knew their roles. One guy’s the tire guy, the other’s the fuel guy. There’s the guy who lines the racer up to the line, and the guy who drew the short straw and actually has to get behind the wheel of this thing.

But, they work with precision. They are each experts at a particular aspect of the car, and together they make the car capable of achieving the vision of crossing the finish line.

Here's what was weird. I never saw that car get out of the garage. What's the point of having a drag racing car, if the rubber never hits the road? In two years at least, that car never left the garage. They had the vision, but they never made it happen.

We work hard at First Pres church to achieve God’s vision for us. Which is good, because the bible says that there will be a day when each one of us will stand before God.

Now, that image of standing before God on the last day shouldn’t be a frightening image. Because, even if we fail, which, frankly, we all will to some extent, even if we fail, scripture is clear that God’s love for us will over ride most anything else.

On that day, God will say, and I paraphrase, “You did a great job, building that car”. “Man”, God says, “that car had a lot of horses under the hood. You were part of a team that built a car that was capable of flying to the finish line.” “Thank you”, you answer. “It was a privilege to be a part of the team.”

We will be happy to say  “Yeah, it did. And it was amazing, to reach out, to move ahead, to realize at the end it was worth the risk”.

We'll be happy to say "I used what you gave me, and the poor heard good news, the oppressed found freedom. Through us.”

“Oh, and God, we discovered that ancient promise was true. You were with us, step by step, through it all.”