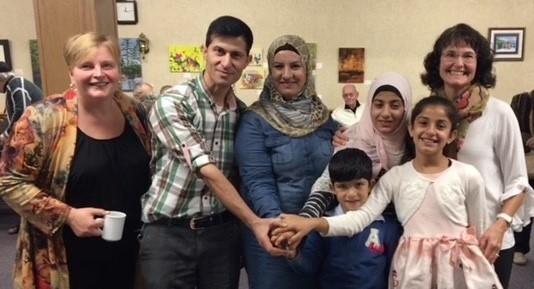 First in Kamloops. The number 215 has been branded onto us. The prolonged tragic consequence of arrogant colonialist thinking. At the General Assembly meeting of our denomination this week, we sat in silence for 215 seconds, doing our best to imagine the grief that each of those families went through. And are still going through.

Then, this awful event in London where all but one of a beautiful and loving family of Muslim faith were murdered. Some wonder if it’s an isolated incident. An unhinged young man, whose actions don’t reflect any larger truth. Maybe.

But there’s a very real possibility the seed that produced this hatred and Islamophobia is widespread. Toward that, let me ask you a simple question: how do you feel about Islam? Honestly. Look deep down. Do you have any fear that a religion you know very little about, with its origins in another land, is growing all around you? If so, why? Where is that fear coming from?

Because I’m a Christian, it makes sense that so much of how I interpret these kinds of events is through a Christian lens. I think of how Jesus and his follower Paul treated people who were different. A rich and beautiful tapestry of stories come to mind, revealing a way of believing and living that builds a world of peace and welcome.

But because I also used to work on the railway, let me tell you this story instead.

I worked for the railway in the early 1980s. It was my summer job as a university student. Through central and southern British Columbia, from Jasper all the way down to Kamloops. God’s country it most certainly was. I remember the weather. Hot sun one day, windy rain the next, and no-see-ums biting us in both.

I remember the tools we used. Sledge hammers, spiking hammers, tie tongs, and lining bars. Everything hard and unforgiving. We often sang as we worked. Yes, just like in the chain-gang movies. “See Elouise, she dressed so fine. She ain’t got religion on her mind. O boy won’t you line the track.”

More than anything, I remember the men that I used those tools with. They were labourers that come from all walks of life. I remember a couple of guys from Quebec, Eric and Serge. We would work 17 days in a row, 12 hours a day, and then we’d get 4 days off. After 17 days of working, those guys would go into the nearest town and in a couple of days would blow every penny they had made on what they called “the holy trinity.” Poker, drinking, and fast women.

There were a lot of guys who had done time. They couldn’t get work anywhere else. There were guys who had warrants out for their arrests back east. I lost count how many men I worked with who were wanted men in Ontario and Quebec. Many of them were Satan’s Choice and Hell’s Angels. Working out in the bush of BC’s interior was a pretty good place to hide for a while.

There were East Indians and Portuguese immigrants who had no English at all when they came to Canada. So, they learned to speak English on the railway. As you might imagine, the defining characteristic of railway English is the expressive expletive. Progressive profanity. Language filled with colour you might say. When they ran out of swear words, they just made up their own.

And then there were university students, like me, just trying to save enough money for the school year and then get the heck back home.

As different as we all were, as the months passed I got to know all those men. Working with them. Swinging hammers with them. Sweating through black-fly season with them. Dumping ballast with them through clouds of lime dust. Over time, and quite unexpectedly, what I discovered was a brotherhood. A brotherhood that happens when you work hard with other people, no matter how diverse you are.

In the whirlwind of our differences, we discovered sameness. And we became family. Brothers in arms.

In the ancient words of scripture there is a teaching of a thread that runs through every person. Regardless of race or religion. And the teaching says that we are called to look for that thread. Because once that thread is found, you suddenly see family, and not stranger.

When the thread is found, you see friend, not enemy. When that happens, something changes. Doors open instead of close. People are invited in, not waved away. More chairs are set around the table. Jesus said “this is why I’ve come. To bring in this changed world. I call this changed world the Kingdom of God. You just need to find the thread.”

He said, “What was impressive were the people who were there. You couldn’t help but to notice. Not just young people, not just older people. Not just middle class people, and not just the poorer. Not just ties, and not just jeans, not just white, and not just black. Not just Jesus-followers, not just people looking, or curious. But all people. Included in this body of Christ. And, it was alive, because of that.”

It’s a challenge, of course it is. But we can do it. Surrounded by differences, we need to find the thread. We are called to.

If you’re Christian, you believe that God will help us do that.

If you’re Muslim, you believe that God will help us do that.

If you’re Indigenous, you believe that God will help us do that.

We need to find the thread. And we will.

Amazing, Tim. I have no other words, you’ve left me speechless. It’s just perfect.

Thanks Roz! I'm glad you were able to read it. Many blessings, hope to see you soon.