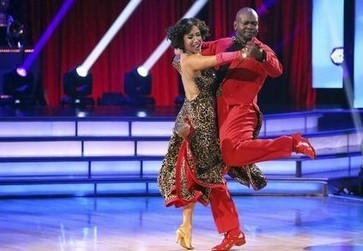 The graphic above is Emmitt Smith, the retired football player, on the show “Dancing With the Stars.” I’ll get to that in a minute.

So, imagine yourself in the grocery store, you’re going through the produce department picking up some fruits. When you’re getting your fruits, what fruits do you buy? Well, chances are you’re like the rest of us. You get your apples, your oranges, bananas, kind of the staple products. Maybe some grapes.

But, there are fruits in the produce department that often get overlooked. I’m curious to know, how many of you on a regular basis buy figs? Fig Newtons don’t count, so let’s weed a few people out right away.

I’m guessing we’ll have a few fig buyers, but not many. How many buy dates? You know what I mean, not romantically, but when you’re in the grocery store, in the fruit section, how many of you buy the fruit called dates?

How many of you buy the fruit rhubarb? Some of you are like “Wait, isn’t rhubarb a vegetable?” No, it’s not, I thought it was too, but I did a little research this week and it turns out a 1947 US court ruled, officially, that rhubarb is a fruit. A very slow judicial year that year apparently.

I would say that “gentleness” tends to be the rhubarb of the fruit of the Spirit. It’s not the fruit that many of us desire, not the fruit that we think much about. We’ll pray for the other fruits, for love and joy and peace and patience, we want those in our lives. But, gentleness, it doesn’t seem as important. It doesn’t make the grocery list. We just don’t have much of an appetite for it.

For many of us, it just doesn’t sound like something we even want, right? Because, when we think of “gentleness”, we tend to think of this passive, kind of wimpy person, who gets walked on.

We would never use gentleness to describe ourselves. When you’re filling out a resume, you don’t write “gentle” on there. Nobody ever hires a gentle person. You hire a person with ambition and moxy, someone who’s driven, and motivated.

We don’t vote for politicians who are gentle. Athletes don’t win the “gentleness” award after the season is over. Well, not that’s entirely true. In the NHL, they have the Lady Byng Trophy, the most gentlemanly player, but, nobody ever cares about winning that one anyway.

Are you ever going to hire a gentle attorney? You don’t want some gentle kitty out there defending you, you want the tiger on your side. The heavy hitter. That’s who we want standing up for us. Somebody who will do whatever it takes.

Do we raise our children to be gentle? Maybe, but, gentleness doesn’t get you the nice house and the big job, does it? It’s dog eat dog out there. Get out there and fight kids.

So, gentleness tends to be something we don’t really desire. But for Jesus, “gentleness” is exactly what we need to have. Jesus modelled gentleness in so much of how he lived and the way he treated people. And when we ask the Holy Spirit to be with us, as Jesus did, when we "keep in step" with the Spirit, as Paul said, the Holy Spirit takes the reins of our power and our strength, so that gentleness can grow.

How many of you have watched the show “Dancing with the Stars”? OK, I admit that I’ve never seen the show. But they showed some clips of it on Sportsdesk, which I do watch. They showed it on Sportdesk because the stars on the show were Emmitt Smith, a football player, and Evander Holyfield, a boxer.

Big burly athletes come on to this show with absolutely no kind of dancing background. They’re trained for power. Hands like bear paws, tree trunks for thighs.

And, at the beginning it’s very awkward for them. They were clumsy as they tried to learn these steps. And they have to pay special attention. They talk to themselves, trying to remember where their feet are supposed to go, and what they’re supposed to do.

But after days and days of practicing this one dance, like, six hours a day for many of them, their feet just start to know what to do. There’s a muscle memory that kicks in, and all the steps that were very awkward at first, soon, with enough repetition, and enough intentionality, become much more natural.

The invitation is here. From Jesus. The next step is yours.

"Come to me, all you who are weary and burdened, and I will give you rest. For I am gentle and humble in heart, and you will find rest for your souls." Matthew 11:28-29

Seems to us that as you age the characteristics of 'gentleness' become easier to embrace within the hectic world around us. Promoting 'gentleness' is leading by example and when we see the opposite speak up.

I agree Bob, there's altogether too much of the opposite in so much around us, But to be honest, I'm not sure if gentleness is coming easier to me as I get older. I have to keep asking for that help. My "grumpy old man" tendencies can rear it's head easily enough. For me, it's a decision that has to be made every day: "Gentle, or not . . .?

Albert Gardiner about 1 year ago

I wish I had the e mail of Jim Jordon, the Republican Senator who is so critical of Dr Fauci.
I would send this to him
We can all criticize others BUT one must do it in an appropriate manner.
Good blog Tim.
Thanks, we all need to be reminded.

Brian McMillan about 1 year ago

Thanks for the reminder for prayer. I pray regularly for fruits of the spirit... often, many times a day! thanks Tim, Brian

Linda Flemington about 1 year ago

I enjoyed this blog very much Tim. I do struggle with gentleness. I was taught as a women’ leader to be strong. However, with strength I lost the gentle side to my personality.
Working on this now with the help of prayer.
I do eat dates and rhubarb...Yeah!!

Interesting comment Linda, in terms of how women in our culture have had to be "strong" to endure with a male-oriented environment, and how that necessity might have impacted their gentle natures. I appreciate that insight.

@ Brian, you and me both brother!

Len Logozar about 1 year ago

Love the dancing analogy. We need many, many do overs to get it right. Becoming a good Christian takes a LOT of practice. Still working on it....