Of Bread and Fudge 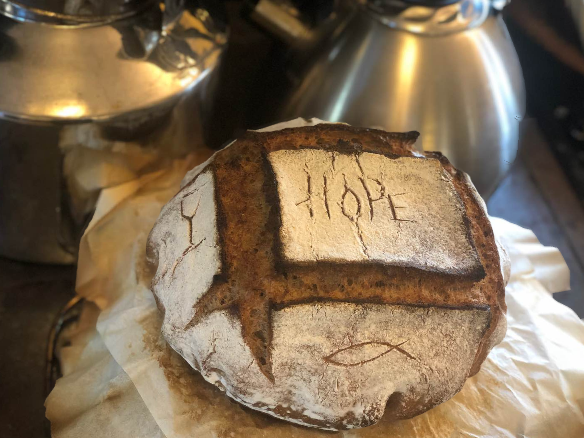 Advent greetings to everyone!

Two Christmas stories. Here’s the first. Christmas of 1968. Six months prior to the summer of love. Another lifetime ago, and yet, only yesterday.

I was 7 years old, and in the days and weeks prior to Christmas I had a habit of counting the presents under the tree that had my name on them. Then, I would count the presents that had other names on them. More specifically, presents marked for my sisters and brother.

Oftentimes, and much to my chagrin, they would have more presents under the tree than I did.  “How come they get more presents?” I said to my Mom. I was quite concerned at the potential household travesty of me receiving less than them.

I remember clearly that my concern didn’t make my Mom mad, but instead, a little sad. It didn’t take me many Christmas seasons to understand that that kind of sad is worse than mad.

Fast forward two years, maybe three. Another Christmas season; I had shoveled some driveways, and had five dollars to buy a gift for my Mom. So I went off to the Kresges. For those under 50, Kresges was a store that was popular a long time ago, before the invention of Walmart.

Five dollars wasn’t a lot of money, but I found something I thought she’d like. They were book-ends, each in the shape of a horse head. My Mom had no particular affection for horses, but they were beautiful and right in my price-range.

I remember how excited I was to give them to her. Not surprisingly, at least, to anyone who has been a mother or a child of one, she loved them. I knew she would. She still has them, these 50 years later, in her house in Meaford, holding up some encyclopedias.

Jesus did say “it is better to give than to receive.” Here’s a safe paraphrase of those words. If you want to feel Christmas joy, give a special gift to somebody. In these difficult times, when the heart needs a good dose of something good, this is the kind of good we really need.

Fast forward again to the last several Christmases. The location is the kitchen in our house here in Nottawa. Thick copper pots come out, a sturdy wooden stirring spoon that looks like it was whittled in the 17th century. Copious amounts of brown sugar and butter. The cooking begins, and the whole house embraces the fragrance of Maple fudge that wonderfully lingers well after the holly and ivy is packed away.

The fudge goes out the door, carefully packed into boxes and brown paper bags tied with red ribbon. “What’s in the box?” people excitedly ask Kimberley? As if they didn’t know. “It’s not Christmas until one of these comes my way”, they say. She smiles, humbly but knowingly.

This year, a competitor has made a home in the same kitchen. Flours of various grains, spelts and ryes, buckwheats and hemps, bought from the mill in Beeton, cover our countertops. A bowl emerges, so huge it has to be stored on the porch. The precious and mysterious starter enters the fray.  The dough is kneaded, divided, cooled, divided again, and finally baked in our wood stove oven at a temperature hotter than the wee gauge attached to the oven door is permitted to gauge.

The end result is a sourdough bread from another realm. Of course, I’m biased, but if you ever bump into anyone that’s had it, they’d be backing me up on that.

But I’ll say this with assurance. I’ve never seen Kimberley happier than that moment. When the bag goes from kitchen to hand.

God bless you, in this season of giving love, from one to another.

All Things New The Great Message of Easter