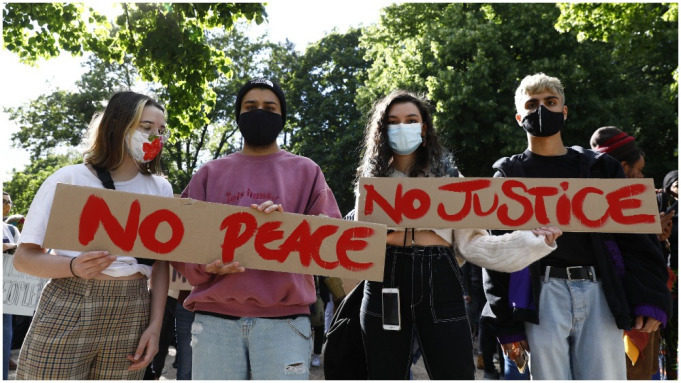 Last night Trump sent Blackhawk helicopters to buzz the heads of protesters in Washington DC. The President said “I am the President of Law and Order. And we are going to stop these protests.”

Here’s what Jesus says about it. From Luke in chapter 12.

“I’ve come to start a fire on this earth—how I wish it were blazing right now. I’ve come to change everything, turn everything rightside up, because some things have been upside down for too long”.

So, here’s the issue upfront. Can there be peace without justice? For Jesus, the obvious answer is “no”. For that reason, injustice needs to be confronted, and not swept under the rug.

In the tradition of the biblical prophets, of which Jesus is a part, if certain conditions exist in a person’s life, there can’t be any real peace.  For instance, where there is poverty, it’s almost impossible to be at peace.

The first time I went out west, I had no money, no job. I stayed with my brother, but he was away all the time working construction out in Jasper. I looked for a job, but times was tough. I lived for two weeks off of this huge jar of peanut butter. I slept on a mattress without any sheets, in a dank room with a 40 watt bulb hanging from the ceiling. You get the picture.

One night, my brother returned home, and snapped a picture of me, lying there on my bare mattress, and he sent it to my mother. It broke her heart.  A few days later, I get a check from my Mom, which was a very good thing. I went out a bought two big boxes of frozen hamburger patties, and four dozen eggs. Those two items were all I knew how to cook.

When someone you love is suffering, you help them. Because, you can’t have peace knowing they are hurting. There’s no peace when someone you care about is living in poverty.

Where there is loneliness, there is no peace.   I did my first year of seminary at Huron college in London. It was great, but, it was Anglican. I was the only Presbyterian there. It’s a long story about why I did a year there. They were friendly enough, but at the beginning it was harder to fit in.

For some of you here today, who are going through a lonely time: do you feel peaceful in loneliness?

Where there is inequality, there can be no peace.  Martin Luther King Jr knew that, when he led marches through cities through America. And on most of those marches, King at some point would be arrested, and his habit on those occasions would be to say to the arresting officer, “Brother, what are you arresting me for?”

So, here it is. If we live within a system that claims to live in peace, but all around there is injustice. Like discrimination. Or exploitation of the weak. Or inequality. Then, there is no peace of Christ. Jesus says “into that system, I will bring division.”

When the Nazis invaded Poland, and then France, and then Denmark, the fighting in those countries stopped, save for a few brave resistance fighters. The fighting stopped. The battles were all over, because Hitler had won. There were no more falling bombs, no more panzer tanks blasting shells through people’s homes. There was . . . . peace. But was that peace? Calmness, order, stability, but only because the powerful are controlling the weak.

When I see the children in our community, doing all the things that they do. Singing, playing sports, acting and dancing in community theaters. They are so precious. The vast majority of them are from decent homes. They are blessed to be Canadian, living in Collingwood, Ontario. They are well fed and not suffering from disease.

But what if those same children lived in places where they were being exploited? Or abused? What if they were hungry, but not able to get to where the food is, because of the greed of someone bigger and stronger? I mean, that happens, in life, doesn’t it? It happens every day.

Let me change what needs to be changed to free of all those who suffer injustice.

Both Trump and Jesus stand in front of the church today holding up the Word for us to see. They both proclaim the need for Peace. One’s real, the other isn’t.

If you’re not sure yet which is which, the Holy Spirit is with you and will be your Helper.

And then, the Peace that is true will be among us.